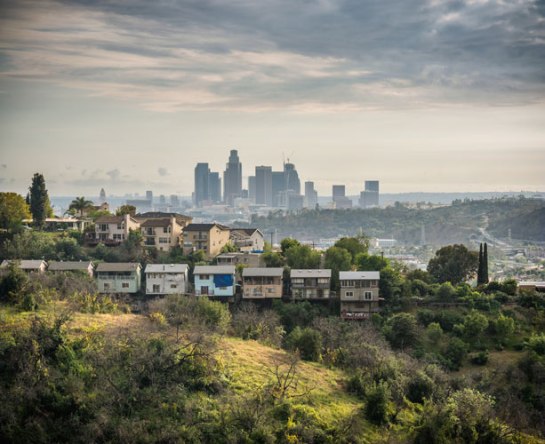 Please join us for Promised Land, Fred Hoerr’s second solo exhibition at Groundspace Project.  In Promised Land, Hoerr takes us through his further explorations of the downtown Los Angeles area, including spectacular views of the city at large, gritty scenes of abandoned industrial neighborhoods and the ever growing unsheltered population trying to maintain a foothold in the interstices of a changing city.

Promised Land is a well-worn phrase that evokes images of expectation and abundance for weary travelers, portends oppression and scarcity for those soon to be displaced or left at the margins, and provides a framework from which to hang stories, to build fables and myths. The ease with which it describes almost anything and defines almost nothing makes Promised Land a perfect metaphor for life in Los Angeles. It alludes to the ingrained beauty and promise to be found in every aspect of life in the city, no matter how unsung or debased.  (Fred Hoerr, June 2016)

Since his first solo exhibit riversystem, Hoerr has had considerable success with his insightful photography.  In the fall of 2015 he was accepted into the prestigious Eddie Adams Workshop, a tuition free, intense four days with top photography professionals that is awarded to 100 students per year.  In addition, Hoerr’s photographs of homeless people living on the edges of the Los Angeles urban landscape have been published by Zuma Press’  zReportage, The Los Angeles Times, The Daily Mail, The Sun and Mirror.

Betty Ann Brown wrote of riversystem,  “There is a considered elegance in Hoerr’s depiction of the urban geometry. And great joy in his depictions of the people. These are not the usual homeless-person-as-passive-victim images we are used to.”   Life Framer wrote: “His work shines a light on the people sometimes thriving, and sometimes just surviving in the strangest of urban landscapes. It highlights the vast inequalities of Los Angeles, and the desperate need to deal with the homeless crisis, but also the ingenuity and free spirit of those that call this place their home.”

GROUNDSWELL will be juried by Mat Gleason, founder of Coagula Curatorial and Coagula Journal, and esteemed curator and critic. He is a contributor to numerous publications and a pragmatic supporter of artists and the arts.   A prime mover in the Los Angeles art scene, Mat Gleason, “a maverick LA art critic, is insufferably cynical, always ‘on’ with a glib comment.” according to Phillip Kennicot, Washington Post.  Perhaps, but anyone who claims to have a polaroid of himself drinking with Charles Bukowski floating around somewhere is okay with Groundspace Project.

Three artists will be selected out of the GROUNDSWELL exhibition for a group show at Groundspace Project in the Spring of 2017.

Accepted Media: Please submit 3 artworks; wall work or floor sculpture (with stand/pedestal) not exceeding 48″ in any direction or 25 lbs in weight.  Please submit jpgs, 300 ppi, no larger than 3mb.

Please note:  Sales of artworks in the GROUNDSWELL exhibition will be handled directly by the artist.  Groundspace Project has no storage space so artwork not picked up within 10 days of the end of the exhibit will be tossed.  Groundspace Project will take utmost care of your work but is not responsible for damage.