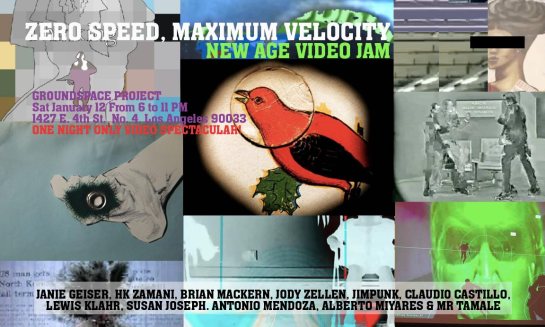 Lewis Klahr‘s films unspool like Delphic visions or vignettes glimpsed in a crystal ball in which dream, memory, and history are indistinguishable. His work has been part of two Whitney Biennials and most recently was featured in the Drawing Surrealism show at LACMA.
New media artist Jody Zellen‘s digital environments manipulate existing technologies to activate both public and private spaces in a playful relationship between what is seen and what is imagined.
HK Zamani sees his work within the extended field of painting  His performance-based videos address issues of vulnerability and power.
We don’t know who or what French artist Jimpunk is, and we’re no sure what to make out of his/her/their hacked, sampled, scratched, cut-and-paste and media mashworks.
Master puppeteer and world-renown filmmaker Janie Geiser makes poetically lyrical films transport you to a separate reality.
Susan Joseph makes performance-based video and sound montages that play on her internal dialogue in a self-disrupting narrative.
Brian Mackern is a new media artist based in Montevideo, Uruguay, who has shown and performed throughout South America, Europe and Asia.
Claudio Castillo produces generative, non linear animated, reactive paintings that are driven by real time data streams.
The evening will be capped by Alberto Miyares and A. Mendoza who perform as the collective Mr. Tamale and will set loose their retina-melting audio-visual assault with help from musical collaborators.