Given the generous opportunity by Susan Joseph, founder and director of Groundspace Project, to curate, I wanted to organize an exhibition that would celebrate painting for what it is; for what it can be.

The participating artists love to paint and the work proves this.
The medium of painting is a tricky one.
Each of the artists has, in their own way, tackled this.
Through their endeavours they find their own voice within the genre.
They find ”a sense of differentness”.

For the three week duration of the exhibition, A Sense of Differentness, the work of six artists come together to hang collectively and rejoice in just what they are – paintings.

DANIELA CAMPINS is a painter working in Los Angeles.  Daniela was born in Leeds, England, and grew up in Venezuela. Daniela completed an MFA at the University of California, Santa Barbara.   She was a recipient of the Painting and Printmaking Fountainhead Arts Fellowship from Virginia Commonwealth University. Her work has been exhibited in Los Angeles, CA, San Francisco, CA, New London, CT, Richmond, VT, and Tokyo. Daniela belongs to Manual History Machines, an LA-based curatorial collective formed in 2012. 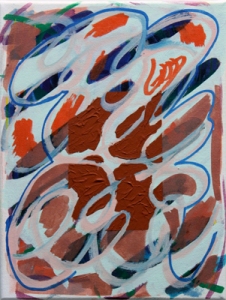 Daniela Campins’ drawings and paintings articulate aspects of physical concepts such as gravity, buoyancy, collision, pulling, and dissolution. Drawing into painting, marking the surface, and traces similar to cursive handwriting, are part of her visual vocabulary. The work is achieved through a constant of impulse and restrain, a visual narrative of traces, fallen marks, anchored smudges, and severed shapes.

NATHAN DANILOWICZ  (b. 1980 Pennsylvania, USA) received his MFA from the University of California, Los Angeles in 2007, and a BFA from the Maryland Institute, College of Art in 2002.  A MacDowell Colony Fellow (2009), he has exhibited in galleries and museums nationally and internationally in solo as well as group exhibitions. 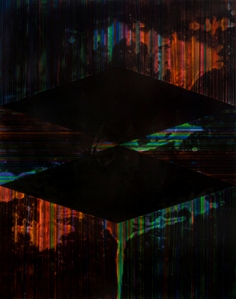 My paintings explore ritual, alchemy, sci-fi shamanism, and how abstraction can inform experience.  In my work, the cosmetic cover of reality is bled to the surface with no resolution offered: anti-transcendental and absolute finitude. It is in these psychic places and embodied movements that I explore the fractured psychologies that have arisen in the midst of our dystopian techno-isolation. Contemporary art can act as mirror to society– that being said, my work is more introspective rather than reflective.

REMA GHULOUM currently lives and works in Los Angeles, CA. Rema received her BFA in Drawing and Painting from California State University, Long Beach in 2007 and her MFA from California College of the Arts in San Francisco in 2010. Rema was a recipient of the Esalen Pacifica Prize in 2012, the Joan Mitchell Foundation Grant in 2010, and the Max Gatov award in 2007. Rema has exhibited nationally and internationally at venues like the Cue Foundation, UCLA’s New Wight Gallery, Sonce Alexander Gallery, George Lawson Gallery, den Contemporary, UCSB’s Gallery 479, UC Berkeley’s Worth Ryder Gallery, the Torrance Art Museum, and Arka 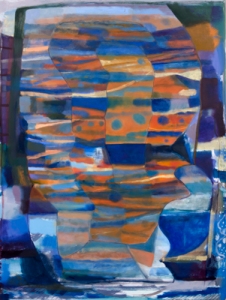 Gallery in Vladivostok, Russia. Since 2012, Rema has been one of the four members of the curatorial collective – Manual History Machines. Manual History Machines were recipients of the Curators Lab Exhibition Award by Fellows of Contemporary Art, Los Angeles in 2013 and have presented exhibitions at venues thorough the Los Angeles area, including Fellows of Contemporary Art, Claremont Graduate University, DAC Gallery, and Eastside International. Rema is currently represented by Sonce Alexander Gallery.

My everyday experience of noticing informs my process of making. I respond directly to my external and internal environment, which in most cases is reflective of my studio and its surroundings. The ways in which one sees, absorbs, and recalls an experience is fascinating to me, and I consider how this can be translated and transformed through painting. I make paintings and painted constructions that inform one another, resulting in the visual language that generates subsequent work.

My painting practice oscillates between abstraction, representation, and the illusion of two and three-dimensions. The forms in the paintings emerge out of the process of building up the surface. I apply more stress on spatial contrasts created through this process — carving out shapes through layering and excavating color, marks, and pattern. They then begin to recall the painted constructions, but also remain in a state of becoming — shifting and transforming.

MIKE McLAIN received his MFA from Claremont Graduate University in 2010.  He earned a BFA from Southern Illinois University Carbondale in 2008, where he won the prestigious Rickert-Ziebold Trust Award. His work has been shown in and around Los Angeles as well as in Illinois, Palm Springs, Joshua Tree and Las Vegas.  He has also curated exhibitions in Los Angeles, Pomona, and at the Coachella Valley Art Center in Indio, where he is currently an artist in residence.

My work provides a challenging retinal experience by mixing multiple layers of pattern with unexpected materials.   At times the resulting optical confusion creates disorienting illusions of depth, dimensionality, and movement.   Initial visual impact attracts, while questions of material and process maintain interest, creating extended viewer interaction.  I combine as many conflicting visual cues as possible, pushing the work close to the edge of chaos while maintaining cohesion.  I am not interested in producing decorative objects, expressing emotion, or conveying narrative through abstraction.  Instead, I am engaged in an investigation of the interplay of line, color, form, pattern, and material.  While I use tropes of geometric abstraction such as the grid in my work I adhere less stringently to the strict formalism and clean lines most often associated with that discipline.  I allow chance to play a part in my work, the overlay of patterns producing forms that are not of my design.

STEPHEN PARISE b. 1975, resides in South Pasadena. Received an MFA from the Finnish Academy of Fine Arts in Helsinki in 2006. Was awarded a fellowship residency at the Willapa Bay AiR in Washington for the month of August 2015. 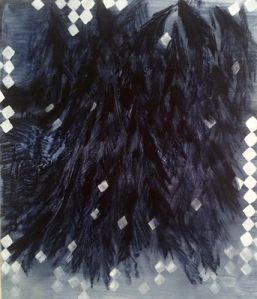 I like to have as much visual freedom as I can – that’s the starting point to my work.  One thing I find really useful when I begin a painting is to tie it to some idea or a subject. The titles, I believe, reflect that. It’s important to me to visually explain something rather than recreating an image of what it looks like. That’s why I work with memory. If I was working with a photograph then that’s all about the image for me. Where as if I am thinking of a particular situation or memory (in order to explain something – what something felt like), then I’m incorporating all the other elements that I’m really interested in and how to translate that visually. Things like the space around something, or even whether something felt hot or cold, all these different kinds of senses. 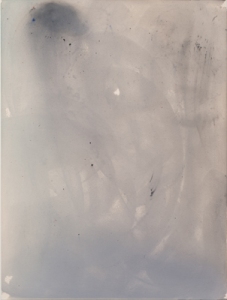 In my work, I attempt to harness the tension between opposing forces, from the conscious and the unconscious, to the accidental and the very deliberate. The paintings are oftentimes started by wetting and painting the back of the canvas or linen (thus seeping through to what will become the front) and then adding additional elements and textures. In this way a great sense of unpredictability unfolds, enabling an amalgamation of naked process and careful planning.

The paintings are frozen in the act of becoming.  At its genesis, a painting has a very powerful and unique energy.  I hope to capture this and to put it into perfect, weightless balance. The aim is to carve out an evocative region in that particular and peculiar dimension; ‘painted space’. The result hopefully conveys as much emotion and sense of place as it would if if it were populated with figures and recognizable landscape elements.